Complete series source code can be downloaded from GitHub.

Now that we are done with all the necessary pieces of stuff its to get into some real business. Its time for Angular. We have crossed our Station 3 and way to Station 4. When you reach Station 4, you will be aware of how to create an Angular application and what all it involves

Are the words, station 3 and station 4 confusing you? It means that you are not following this series from the beginning.

This article is part of a series called “Learn Angular from 0 to 100”. We imagine this series as a train journey. Every time we reach a new station, we become competent in something.

Right now, we are in Station 3. Let’s start our journey to Station 4, and when you reach there, I assure you that you get well aware of TypeScript. You will understand why you need TypeScipt and how it is essential.

Let’s start understanding what the Angular is?
It’s a framework for building a “Single Page Application.” Well, if you are not still clear what is “Single Page Application” and why it is referred to as “framework,” then just relax. When reaching the end of this series, we will ask ourselves the same question again and let see what we get then.

How to create an Angular application?

First, I will explain to you the steps, and then I will create our very first application.

Before I start, one suggestion, don’t worry if you won’t get through these steps 100%. Just move on till you reach to next module where we create our first Angular application.

Let’s elaborate on each step.

Let’s list down all the steps we are supposed to finish this part.

Angular applications are recommended to be developed in TypeScript, so the first thing we do is downloading TypeScript.

Next, we create the “tsconfig.json” file and do the initial configuration.

Angular is a JavaScript framework created by Google, and we need to download it.
Now the most significant challenge we have in our hand is, its not one library. The Angular itself is written in a modular fashion.

We need to download each of them using npm.

The best way to do it is, create package.json and mention all dependencies in it so that you can skip the downloaded libraries from your version control and hence can reduce the total size of your app.

(Do you recollect the first article in this series where we discussed the advantages of package.json)

One relief is, we are not required to explicitly download “type definition files” of these modules because we get them as a part of the framework download itself.

“RxJs” is a reactive extension library for JavaScript.
“zone.js” provides the execution context for Angular.
“tslib” is a runtime helper of TypeScript that contains some helper functions.

Relax, don’t worry about these libraries. Angular is using them internally, and you need them to create an Angular application, and they can be downloaded again using “npm.”

So far, we have not written a single line code, but soon we will, and trust me, we will write a lot. Although we write TypeScript end product is going to be JavaScript, and we already have libraries downloaded in the above step.
So better download and configure the “Module Bundler.”

It’s a web application, and we need a web-server to run it. You can use any you like, or you can even think of using dev-server provided my Module Bundler.

Relax, don’t worry much about “Components” and “Modules” for now. A detailed discussion is waiting for them. For now, just get the concept. Now, out of those multiple “Angular Modules,” one will be considered as the “Main or Root Module,” and similarly from all the components of that “Main Module,” one will be regarded as “Main or Root Component.”

You must be wondering how to do all those things. Well, the answer is by writing code, and that’s what “Writing startup code is all about.”

We also need an HTML file, which is going to be our startup file. Create it using any editor you like.

You must be feeling dizzy by now. 😊 So many startup things, startup file, a root component, and a root module.

We will look into that code later. For now, just understand that this is what we are supposed to do.

Now it’s a natural step. Use the “Module Bunder” downloaded in Part 1 and bundle everything into one JavaScript file.

Part 4 – Use the Component

So finally, its time to follow the above steps and create our first application.

Or maybe I can teach you a simplified way to do it.
All the steps mentioned above are encapsulated inside a command-line interface called “Angular CLI.”

For that, execute below command in some folder in your machine.

Once the above command completes its execution, you will get “ng.” Using it, create a new project, “myApp” as follows.

It will ask a question in between. Let’s ignore this question for now. Press “N” and then enter.

It will be continued with another prompt. Ignore it and enter. 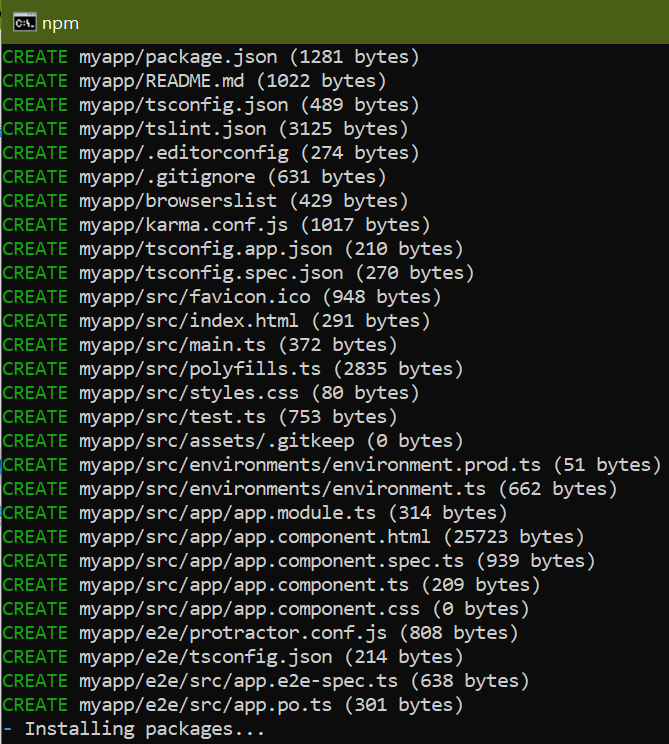 The installation will take some time.

Once the installation is done, you will notice a new folder gets created “myapp,” and inside it, you will see a couple of files. 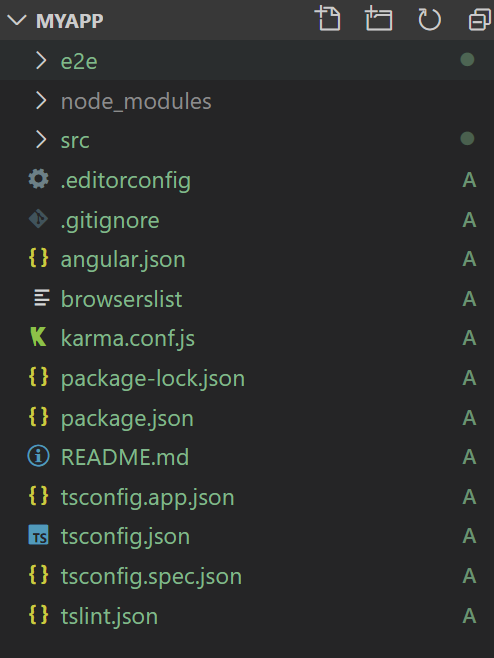 You must be wondering what just happened. The simple answer is, out of the four steps we mentioned above, the first two steps are done, and that is “Download and configure” and “Write startup code.”

Now you must be feeling relieved. Then I suggest getting into the next step.

Navigate to the “myapp” folder and then execute the below command. 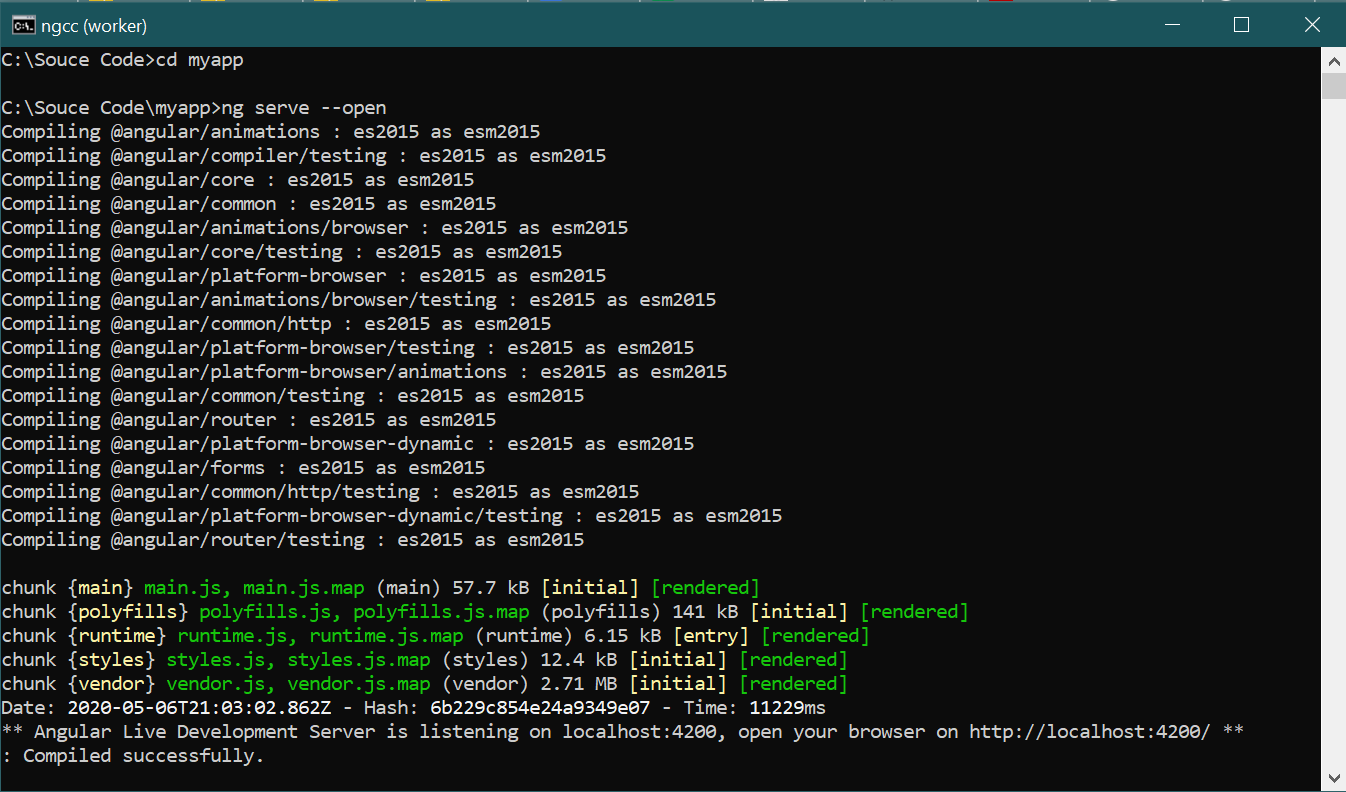 You will notice something like above, and in the end, you will see a browser automatically get launched with the following output. 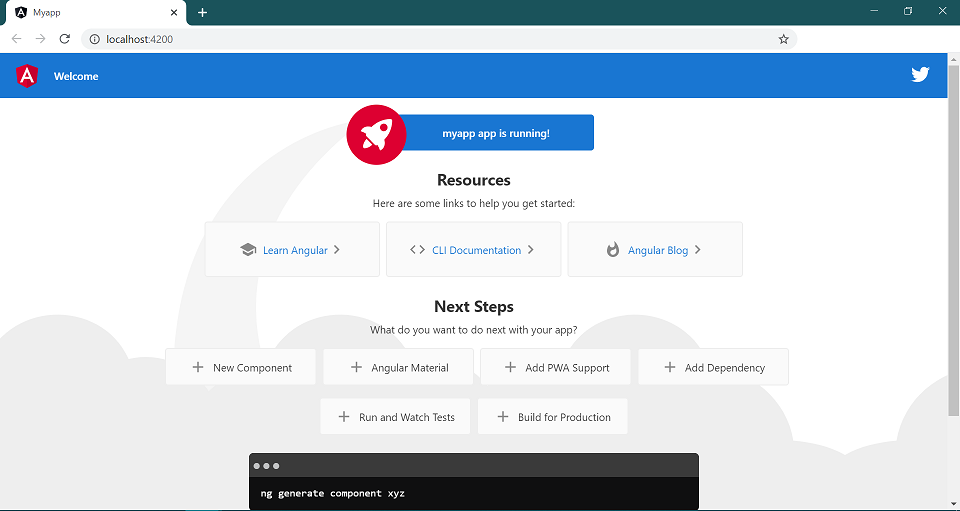 Are you wondering what happened? Part 3 and Part 4 happened.

With “Angular CLI,” creating the first Angular project, is a piece of cake.

Where is Hello World?

I am sure if you an old person like me, then you are missing “Hello World.” The first sample of any new technology.

I won’t disappoint you. Before we start exploring the project created above first, let’s bring our “Hello World” back. 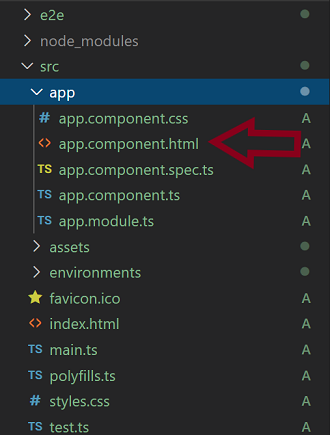 A prefer Visual studio code that you can download from the following link.

Now let’s get our “Hello World.”

Make sure “ng serve” is still executing. Don’t close it.

You will notice a lot of things written inside it. Delete everything and put the following HTML.

Save the file, and that’s it. No need re-execute “ng serve” command and no need even refresh the browser as it will auto-refresh. Switch to your browser, and you will notice updated output. 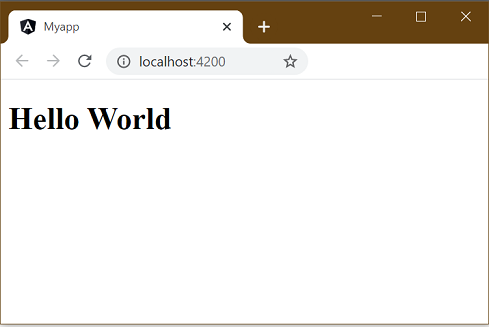 Now, lets a take a look at our Root Component first.

Please note, we will discuss both “Component” and “Module” in much detail further in this series. As of now, let’s explore our first project.

Let’s open the TypeScript file and study it.

For now, let’s remove the “styleUrls.” We will have a separate discussion for the same. Remove it, and the output will be the same.

Next, you must be thinking if a new HTML tag is created then where it is used.
In the “src” folder, you will find an HTML file with the following contents.

As you can see, the “app-root” tag is used inside the body tag.
“Angular CLI” is internally using “Webpack” and “Webpack-dev-server.” It dynamically injects the bundled in-memory file into this HTML file on execution. Don’t worry about the deployment and all for now. We will see it in action very soon.

Let’s do one small experiment. Remove the “app-root” tag from this HTML file and check the output.We will get nothing but a big white screen as the body tag is empty now. But the strange thing you will notice in the developer console of your browser.

It is a must to use “app-root” in the “index.html” as “AppComponent” is a Root Component.

For that, let’s look at our Root Module.

In the same “src” directory, you will see a file “app.module.ts” it contains our Root Module.

We will talk about other things inside “NgModule” later in the series.

The answer is hidden inside the “main.ts” file in the “src” folder.

Ignore everything inside this file for now.

Bundling starts from this file, and then all the dependencies are identified,transpiled, and finally bundled into one.

It’s much simpler than you think. Execute the below command.

Once the above command completes its execution, you will find a new folder get created called “dist.”

Inside that folder, you will see the “Index.html” file and a couple of JavaScript files. That’s what we have to deploy.

You will find three kinds of JavaScript files.

Other files in the project

Other files are self-explanatory.

We have crossed the first step of Angular learning and reached Station 4.

In the next couple of articles, we will explore other fundamental concepts of Angular.

I hope you have enjoyed this writing.

Stay tuned and practice well. Please drop comments and clap. It helps us to stay motivated to write more such series.

In case you are looking for customized mobile or web application development, exclusive technical consulting for architecting your project, or want to train your people in advanced technologies, you can visit my company Just Compile or contact SukeshMarla@Gmail.com for details.

About the Author: Sukesh Marla

I am a passionate programmer and a founder of Just Compile. My company is specialized in consulting, customized application development, and training. You can find me on twitter @sukeshMarla